WebPT wants to hear your ideas on how to improve our products to help with your day-to-day workflow! To do so, we have created an Ideas Portal to submit ideas and to hear from users like you who use the products every day!

Review the video below on how to navigate to the Ideas Portal, successfully submit an idea, and how to upvote and comment on other Ideas within the forum.

What happens after I submit an Idea?

The Idea will be sent to our team to review, once it has been reviewed, you will receive a notification sent to your email provided. You will also be able to check on the status of your Idea within the Portal under My Ideas.

How long does the review process take?

The submitted Idea will be reviewed by a Product Manager within 30 days of submittal.  If the Idea is reflected in the wrong product team or might impact other products, the response could be delayed due to additional preliminary coordination and discussions. Sometimes the response time can also be delayed due to the volume of Idea submittals for a specific product.

Once the Product Manager has reviewed the Idea, what responses should I expect?

What happens to votes if an Idea is merged with another?

If your Idea is merged with another Idea, the votes are also merged.

Can I vote more than once on an Idea?

You will only be able to vote once for any idea. If you attempt to vote again, it will remove your original vote.

How do Ideas get adopted by the Product team?

Each Product team has its own dashboard where the number of ideas and statuses are reflected. This dashboard also allows them to review pending ideas and review ideas that are planned for future development. Before an Idea can be planned for future development, it must be tied to an existing initiative. Generally between the initiative and development will be a buffer period where Ideas are reviewed and integrated into the development lifecycle. Most development cycles are planned 6 weeks in advance, after an idea is considered, it could take at least another month or two before the submitter receives another update.

How can I sign up for the Ideas Portal? 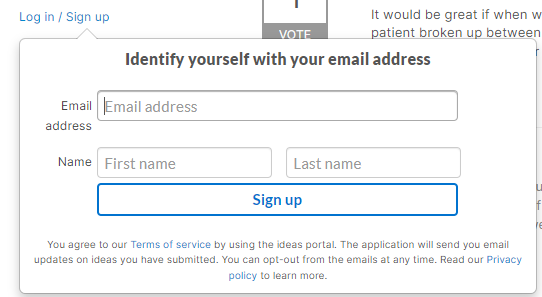 Did this answer your question? Thanks for the feedback There was a problem submitting your feedback. Please try again later.
Last updated on May 26, 2022